Have you ever thought what would happen if moms around the world decided to stop doing all the chores?

Generally speaking, it’s the moms in the house who still take on the housework. I know that we’ve come a LONG way with gender stereotypes and expectations; however, they’re still out there.

After a long day at work, women come home to pull off ‘the double shift’ at home. If you’re a mom, you know this well. Although you say you split the homework with your partner, it’s YOU taking care of the entire house.

I know it, you know it, and ALL THE MOMS out there know it.

This mom decided to stop doing all the chores

One woman decided to see what would happen if she decided to stop doing all the chores. Like other moms, she spends most of the time she’s at home cleaning up after her family.

She’s done listening to excuses and wanted to experiment within her household – stop cleaning up after them. Radical, right?

“Two days ago, I decided to stop doing the dishes. I make all the dinners, and I am tired of having to do all the cleaning too. SINCE THEN, this pile has appeared, and at some point, they are going to run out of spoons and cups and plates. Who will blink first? Not me,” Shares Twitter user @MissPotkin [1].

By day three, her family ran out of bowls and some cutlery. But jokes on them, if they want clean dishes, they will have to wash them themselves. The madness!!

After she decided to stop doing all the chores, her family still didn’t clean up.

Of course, when there’s dishes lying on the counter, the natural thing for some people is to IDK DO THEM? However, this family has other plans.

This member of the family decides to use the baby’s weaning spoon instead of loading the dishwasher to get some fresh spoons.

To make matters a little more chaotic, she’s not doing laundry anymore. Meaning she decided to stop all the chores in the house and not just dishes 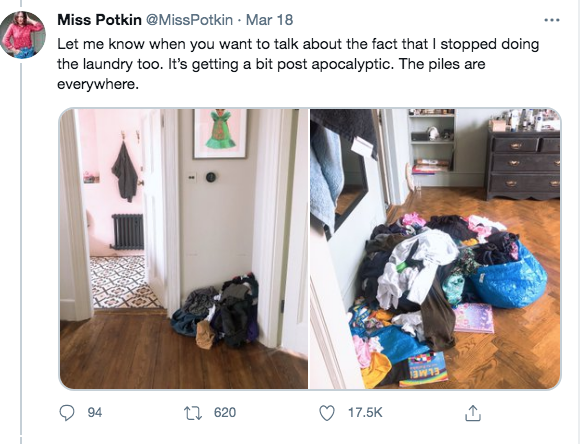 What’s the worst thing you think could happen after the mom of the household stops doing all the chores? How about the toilet paper running out??

Basically, it’s time to appreciate the heck out of the women in our households because they work every day to make sure we live in a clean and proper environment.

“I see that judgey fucking Twitter has woken up so let me say this once and be clear – We do not ‘live like this’. This is a lesson in wanting to be heard and respected and not having to repeat yourself when things slip. We’re navigating the day-today in extraordinary times,” Miss Potkin tweeted. “We keep our homes tidy because love. We cook food and set tables and fill the air with scents of roses and fresh laundry because love. Love is patient but love is also fucking tired because she works 14 hour days.”

Keep Reading: Frankly, It’s Nobody’s Business When It Comes To How Many Children You Have